A single surgery for diaphragmatic and pelvic endometriosis

Dr. Ceana Nezhat describes how surgeons can perform a video-assisted combined laparoscopy and thoracoscopy.TEXT BY CHRISTINE KILGORE
An estimated 12% of extrapelvic endometriosis involves the diaphragm or thoracic cavity – most commonly the diaphragm – and in some hospitals its occurrence is drawing together gynecologic surgeons skilled in video-assisted laparoscopy (VALS) with thoracic surgeons trained in video-assisted thoracoscopic surgery (VATS) to diagnose and treat the most severe cases.
Most diaphragmatic lesions occur on the abdominal side and right hemidiaphragm, and can be successfully removed in symptomatic patients with hydrodissection and vaporization or excision. But when lesions are believed to be deep or involve the entire thickness of the diaphragm, and/or when patients experience catamenial pneumothorax, catamenial hemothorax, hemoptysis, and pulmonary nodules (defined as thoracic endometriosis syndrome), a combined VALS-VATS procedure becomes a good option, said Ceana Nezhat, MD, a gynecologic surgeon and medical director of the Nezhat Medical Center in Atlanta 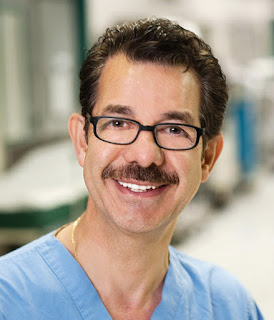 Through a multidisciplinary and minimally invasive treatment approach, surgeons can then address both diaphragmatic and pelvic endometriosis – as well as both visceral and thoracic diaphragmatic endometriosis – in a single operation. (The majority of women with thoracic endometriosis have concomitant abdominopelvic endometriosis.)
Diaphragmatic endometriosis “requires a multidisciplinary approach [when it] needs to be treated from both above and below the diaphragm,” said Shady Eldaif, MD, a thoracic surgeon who works with Dr. Nezhat at Northside Hospital in Atlanta.
“It takes a good bit of coordination, but by operating once [rather than] exposing the patients to multiple procedures, the benefits to the patients are enormous.
Diagnosis and treatment on the abdominal side
While diaphragmatic endometriosis often is asymptomatic, patients who are symptomatic can experience progressive and incapacitating pain. They can go undiagnosed for long periods of time because of a traditional focus on the pelvic region and a lack of reliable diagnostic and imaging tests. Diaphragmatic involvement can also be misdiagnosed as other conditions involving the gastrointestinal tract – or of cardiothoracic origin – because of the propensity of diaphragmatic disease to occur posteriorly and hide behind the liver, said Dr. Nezhat, medical director of training and education at Northside Hospital.
Classic symptoms include shortness of breath, pleuritic chest pain (more often on the right side), shoulder pain (usually the right shoulder), and upper abdominal pain on either side. Sometimes, diaphragmatic endometriosis occurs in association with catamenial hemothorax or pneumothorax. 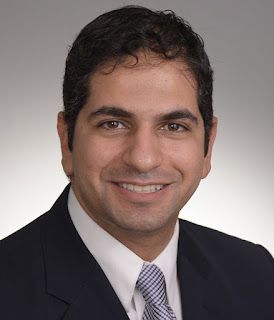 Symptoms usually occur cyclically with the onset of menses, but sometimes not, Dr. Nezhat said. And while lesions seem to occur most often on the abdominal side and right hemidiaphragm, they have been found on all parts of the diaphragm, including the left side only, the thoracic and visceral sides, and the phrenic nerve. There is no correlation, moreover, between the size/number of lesions and the presence or level of pain, or the occurrence of either pneumothorax or hemothorax, he said.
Dr. Nezhat said he routinely inspects the diaphragm for endometriosis at the time of video laparoscopy. Placement of a 10-mm port at the umbilicus and two or three additional ports in the upper quadrant (right or left, depending on implant location) allows for examination of the posterior portion of the right hemidiaphragm and almost the entire left hemidiaphragm in addition to routine abdominopelvic examination.
In women who have symptoms, Dr. Nezhat said he achieves even better laparoscopic visualization by repositioning in steep reverse Trendelenburg and using an atraumatic liver retractor or grasping forceps to gently push the liver caudally. Visualization of the posterior diaphragm can also be enhanced by utilizing a 30-degree laparoscope angled toward the back, or by using the Endocameleon scope (Karl Storz); the latter has a versatile lens and can be adjusted in five steps from 15 to 90 degrees, which is ideal for this procedure, Dr. Nezhat said. At times, he added, it is helpful to cut the falciform ligament near the liver to expose the right side of the diaphragm completely while the patient is in steep reverse Trendelenburg position.
Bluish pigmented lesions are the most commonly reported form of diaphragmatic endometriosis, followed by lesions with a reddish-purple appearance. However, lesions can present with various colors and morphologic appearances, such as fibrotic white lesions or adhesions to the liver, he said.
Dr. Nezhat said he uses the CO2 laser (set at 20-25 W) with hydrodissection to excise or ablate lesions that are superficial. “It’s much more precise and has a smaller depth of penetration and less thermal spread, compared with electrocautery,” he said, noting that it also reaches the hard-to-access area behind the liver. “We’ve treated many types of diaphragmatic lesions [with the CO2 laser], even endometriosis in the vicinity of the phrenic nerve and directly in line with the left ventricle.” 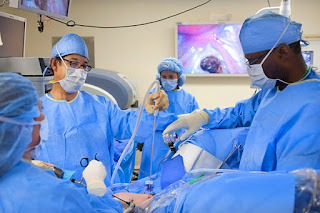 Plasma jet energy and ultrasonic energy are good alternatives when a CO2 laser is not available and for superficial lesions that are diffused. Dr. Nezhat recalled a case involving approximately 20 small and diffused spots of diaphragmatic endometriosis. “For such diffused superficial lesions,” he said, “the plasma jet has a good coagulation and ablation effect.”
Dr. Nezhat said he cautions against the use of cold scissors because of subsequent bleeding that requires bipolar hemostasis. Monopolar electrocautery, he emphasized, is not a good choice for treating diaphragmatic endometriosis because of its greater depth of penetration; this can cause tissue necrosis and subsequent diaphragmatic fenestrations, in addition to unpredictable diaphragmatic muscular contractions and electrical conduction to the heart. 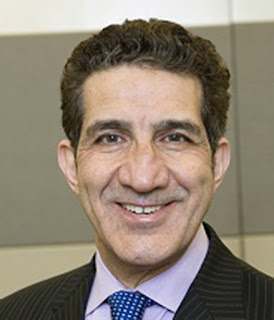 More than 15 years later, in 2009, Dr. Camran Nezhat and surgeons at Stanford (Calif.) University Medical Center described what were believed to be the first four cases of combined laparoscopy and thoracoscopy for the treatment of diaphragmatic endometriosis (J Minim Invasive Gynecol. 2009 Sep-Oct;16[5]:573-80).
In 2014, Dr. Camran Nezhat and his colleagues expanded on this initial case report to describe a case series of 25 consecutive women who underwent combined VALS-VATS for the treatment of abdominopelvic, diaphragmatic, and thoracic endometriosis. The mean age at diagnosis of thoracic endometriosis was 37.7 years. All 25 women had diaphragmatic involvement, and 76% had both thoracic and visceral diaphragmatic disease (JSLS. 2014 Jul-Sep;18[3]:e2014.00312). 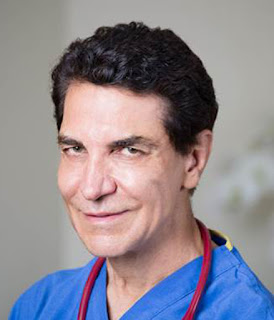