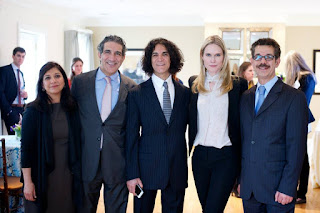 Washington, DC, March 13, 2014 – The Nezhat family with actress and advocate Stephanie March.
The Nezhat family originated from Iran (Persia). Their passion for medicine started very early, after their mother became ill and required a great deal of medical care. The doctors involved in her care saved her life.
After this incident, they grew up with the knowledge that doctors could potentially provide life-saving care and keep families together as a result. On reflection, because of the significant role that Mrs. Nezhat had in the life of her children, three of the Nezhat brothers did in fact become gynecological surgeons.
Drs. Camran, Farr, and Ceana Nezhat, and their niece, Dr. Azadeh Nezhat, have been dedicated to women’s health for decades. During this time, the Nezhats have witnessed young girls and women suffering immensely from extreme physical and emotional pain due to endometriosis. To address these unmet needs in the community, the Nezhat family has made it their mission to develop technologies to better diagnose and treat endometriosis, as well as raise awareness about this invisible epidemic so that millions of women and girls can receive a proper diagnosis, quality medical care, and, hopefully one day soon, a much-needed cure.

The medical history article called ‘Endometriosis: Ancient Disease, Ancient Treatments’, by  Drs. Camran, Farr and Ceana Nezhat et al, was actually the catalyst for the EndoMarch. It was the first article published in a peer-reviewed journal to uncover evidence that many cases of so-called hysteria, the now discredited psychological disorder of lore, may well have been endometriosis all along. Several other disease profiles from pre-modern times were also identified for the first time as sharing striking similarities with endometriosis symptoms, including the so-called disease of virgins, love sickness, furor uterinus (uterine fury), strangulation of the womb, suffocation of the womb, catamenial hematoceles, and many more. The article even found that the retrograde menstruation hypothesis (aka, Sampson’s Theory), once the darling theory of the 20th century, was nothing new: As early as 1697, Dutch Anatomist Ruysch (and others before him) proposed it as a possible cause of a mysterious endometriosis-like disease he was studying at the time.
These and other fascinating details can be found in the following summary of the article:
Demons, witches, madhouses, and leeches
Drs Camran, Farr and Ceana Nezhat’s recent medical review of history dating back nearly 4,000 years has found evidence of women with endometriosis-like symptoms being subjected to ghastly treatments involving leeches, straight-jackets, bloodletting, caustic chemical douches, genital mutilation, being hung upside down, surgical fatalities, and even accused of demonic possession and killed – all because their crippling yet invisible pain was so misunderstood by medicine and society alike.
Mad, immoral, or imagining it all
Another surprising finding is that it seems we have gone backward in terms of treating chronic pelvic pain. Nearly 2,500 years ago the Hippocratic doctors recognized chronic pelvic pain in both women and teenage girls as an organic disorder deserving of compassionate treatment. Yet, by the Middle Ages women with chronic pelvic pain were accused of being mad, immoral, or imagining it all. And, teenage girls were viewed as simply misbehaving cranks. Sound familiar? So-called “bad behaviors” like reading too many books, eating too much, exercising too little, or expressing sexuality were presumed as causes of their pain. They were ridiculed in literature by the likes of Shakespeare and were accused of faking their symptoms in order to malinger, manipulate, or shirk work.
Freud was wrong; the pain was real
Even prominent thinkers like Freud began subscribing to some of these myths, necessitating the invention of imaginary illnesses like hysteria. In fact, one of the paper’s most significant findings was that hysteria, the now discredited mystery disorder presumed for centuries to be psychological in origin, was most likely endometriosis in the majority of cases. In other words, Freud was wrong; the pain was real. The authors found that this centuries-old notion linking chronic pelvic pain to mental illness exerted tremendous influence on attitudes about women with endometriosis in modern times, contributing to diagnostic delays and chronic indifference to their pain for most of the 20th century.
Most colossal mass misdiagnosis in human history
As Drs Camran, Farr and Ceana Nezhat noted, such mistreatment constitutes one of the most colossal mass misdiagnoses in human history, one that over the centuries has subjected women to murder, madhouses, and lives of unremitting physical, social, and psychological pain. Faced with such injustices, historical records demonstrate that women with endometriosis have been contemplating or committing suicide for centuries.
After 4,000 years, little progress
Women have truly paid a staggering price for this appalling indifference, for at least 4,000 years and counting. It is in part because of this shameful legacy that even today endometriosis is, for the most part, still an enigma, and treatments have remained essentially the same for centuries, with only minor variations. By documenting the fact that such mistreatment has been going on for thousands of years, Drs Camran, Farr and Ceana Nezhat and their team hope this research will serve as a wake-up call. Clearly, something has to change; something must be done to end this centuries-long saga of unconscionable inaction. As Drs Nezhat conclude:
“The clock is definitely ticking, as we know millions of women still live lives awash in anguish, just as they did thousands of years ago and just as they will centuries from now unless we steer ourselves faster toward the long-elusive cure. Four thousand years is long enough; the time has come to end the empire of endometriosis.”
http://www.endomarch.org/the-nezhat-family/