Good surgical practice : Prevention of pain and adhesions after surgery. 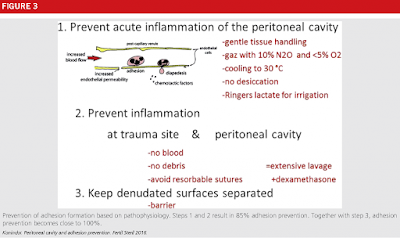 Supplements of anti-oxidants as vitamin C might be useful to deal with oxidative stress.  If not useful they do not harm.

Strict antiseptic measures
Reduce duration of surgery but remain safe
Gentle tissue handling : reduce as much as reasonable grasping, pulling and pushing, with as little force as possible. A minimal trauma damages mesothelial cell integrity.
Moisten gauzes or packs when used.
Prevent bleeding and prevent fibrin deposition by lavage.
Reduce de-vascularized or ischaemic tissue as much as practically possible. Thus avoid excessive coagulation and unnecessarily deep and tight suturing.
Prevent damage to the mesothelial cells in the entire peritoneal cavity

Use a cell friendly solution for irrigation eg Ringers lactate, at RT or at 30°C maximum
During laparoscopy with CO2 pneumoperitoneum
Reduce insufflation pressure as much as possible
Add 10% of N2O
Humidify
Cool the cavity to some 30 °
During open surgery : instillate 1 to 2 L of a similar gas deep in the surgical wound and aspirate to avoid OR contamination. This should prevent desiccation and oxidative stress by the 20% of oxygen in air

At the end of surgery

Extensive lavage until the liquid is clear. This can require up to 8L and should comprise also the upper abdomen.
Dexamethasone 5 mg IM
Apply a barrier to keep opposing lesions separated
Ovariopexie to keep the ovaries out of the pelvis might is useful but this is unclear. If performed it is unclear for how long.

Do not delay unnecessarily long drinking and re-alimentation in order to resume bowel movements as early as possible.
Start prophylactic antibiotics when the risk of infection is increased such as after opening the vagina or the bowel